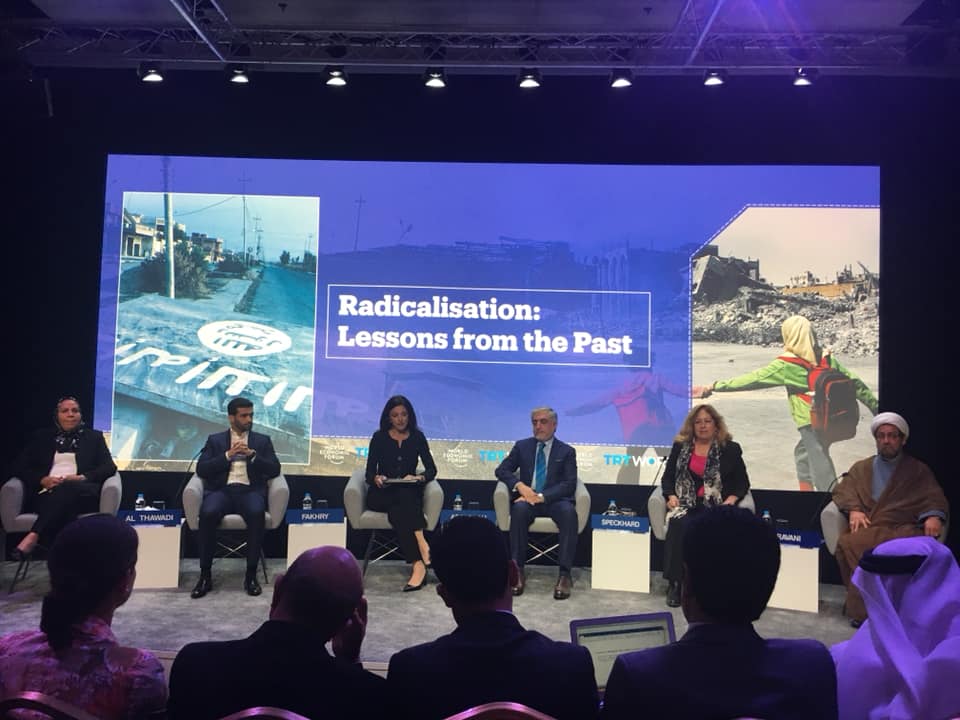 WEF tackled the Middle East and North Africa’s main challenges including climate change, energy price shocks, unemployment or underemployment, water scarcity, radicalization, conflict (including the prospects for a two-state solution between Israel and Palestine) and other challenges countries in the region will have to work to overcome in the coming years.

H.M. King Abdullah Il bin Al Hussein of Jordan emphasized on the important role of youth in Jordan and MENA region. He indicated in his speech in opening session that “Our most important strength is Jordan’s high-skilled human capital,” adding that “our young people are globally connected, tech-savvy, fluent in multiple languages and are determined to succeed. They are proven assets to every enterprise.”

The URI MENA Regional Coordinator was invited to a private meeting with Professor Klaus Schwab, Founder and Executive Chairman of the World Economic Forum along with religious leaders and representatives of faith-based organizations from all over the world. Professor Schwab believes that interfaith cooperation is a key contributor to sustainable economic development. In this respect, he wanted to hear from us about how to engage interfaith in WEF. I introduced URI as the largest interfaith peacebuilding grassroots network that capitalizes on cross-sectoral cooperation to advance the world’s peace and prosperity. I explained that URI affiliate groups use different approaches to contribute to peace and sustainable development, including the economic empowerment of youth and women, dialogue and intercultural understanding, environment and resource efficiency, integration of refugees and minorities, and poverty alleviation. I expressed URI’s readiness to cooperate by facilitating the participation of religious leaders in forthcoming forums. Other participants suggested replacing the term “interfaith” with “multifaith,” as the word interfaith refers to relations between faiths/spiritual paths, while multifaith indicates that all the religions and spiritual paths exist independently side-by-side. Hence, it is less sensitive. We all agreed to use the word multifaith cooperation. We also recommended including multifaith cooperation as a main track for forthcoming World Economic Forums.

The URI MENA Regional Coordinator attended a private meeting with religious leaders and representatives of faith-based organizations to generate ideas on how to enhance our role in advancing world peace and sustainable development. Additionally, he participated in the following sessions:

– The big picture on peace & conflict
– Need for regional education to keep pace
– Radicalization: Lessons from the Past (How to prevent radicalization in all its forms)
– The fourth industrial revolution in the Arab world
– Building new platforms of cooperation
– Global Governance
– Measuring inclusive growth