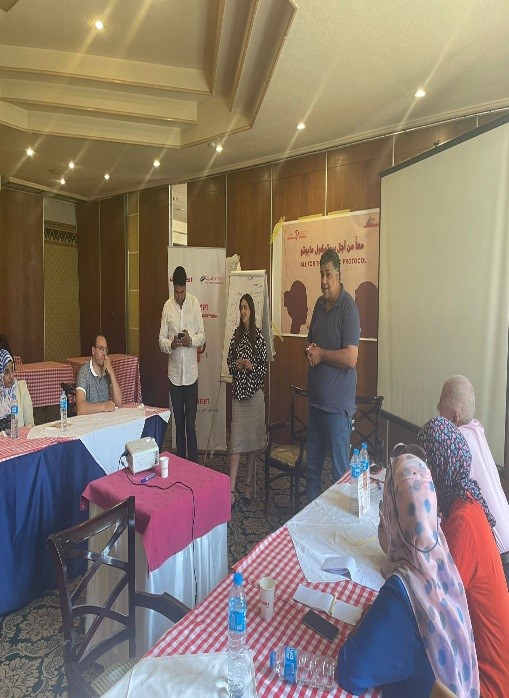 The Association of Egyptian Female Lawyers (AEFL), in cooperation with the National Association for the Defense of Rights and Freedoms and member of SOWAR Egypt Network, has concluded its training about “All for Maputo Protocol” which was held in Luxor with a number of NGOs representing Aswan, Luxor, Qena, Sohag and Assuit. The training aimed at raising awareness in regard to articles of the African Protocol of Women’s Rights (Maputo Protocol) on one side and to advocate to support the Egyptian State’s efforts towards ratifying Maputo Protocol from another; the matter which comes within the international and regional commitments of Egypt in Africa.

The training tackled a number of topics including the definition of terms related to treaties, protocols, their ratification and signature mechanisms and a presentation of the most important international conventions relating to women and which are signed by Egypt. The training also shed light on the African women’s reality and the most important challenges faced by them, in addition to reviewing their gains during the past few years. Besides, the training reviewed the African Protocol of Women’s Rights, known as Maputo Protocol, and the most important civil, political, economic and social rights within the protocol. The training also included drafting a memorandum in human rights language addressing the Egyptian government to necessarily ratify Maputo Protocol.

Ms. Rabha Fathy, the chairperson of AEFL, has assured that the training came in coincide with the campaign of CSOs which call the Egyptian government to ratify Maputo Protocol and AEFL’s belief in the necessity of Egypt’s commitment to its international commitments especially in regard to eliminate all forms of discrimination against women in general and the African women in particular. She added that the training included a simulation by the trainees in which they discussed the justifications upon which Egypt should ratify the protocol and highlighting the importance of signing it. Ms. Also Fathy pointed out that the training was delivered by a number of experts in the field of human rights and development among them are Ms. Mona Ali El Dien, gender and women empowerment expert and Mr. Hossam El Dien Al Amir, the media interviewer, journalist, specialist in communication mechanisms and trainer of simulation models.

In the same context, Mr. Walid Farouk, the chairperson of the National Association for the Defense of Rights and Freedoms, said that the training included a number of associations and organizations working in civil society especially in the field of women’s empowerment and participation to introduce the protocol to them, in addition to the national mechanisms which should be taken by the State upon signing or ratifying conventions and protocols. Mr. Farouk added that through the workshops included in the training the participated NGOs could know about all the protocol’s article and how it guarantees comprehensive rights for the African women including the right to participate in political process, social and political equality, improve independence in reproductive health decisions, reduce FGM and other women’s rights.

It is worth mentioning that SOWAR Egypt membership includes the Association of Egyptian Female Lawyers, the National Association for the Defense of Rights and Freedoms and the Forum of Development and Human Rights Dialogue. Through its training and activities, SOWAR Egypt Network seeks to be supported by NGOs in Egypt.