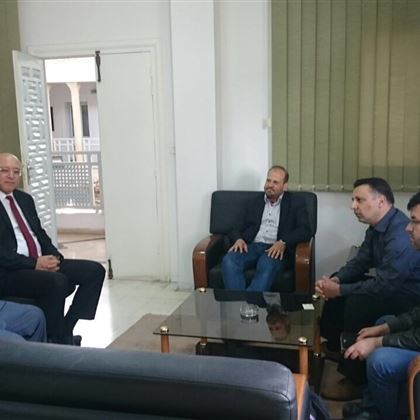 Morocco: Agadir April 6th &7th 2017:   We participated in the first international conference on “Peace in Diversity: The Integrative Approach to Inter-cultural and Civilizational Affairs”.

URI MENA delegates were invited to take part in this international conference which held at the International University of Agadir (Universiapolis) – Agadir, on 6th and 7th April 2017. The conference was organized by the International University of Agadir (Universiapolis) – Morocco, Federation of the Universities of the Islamic Word (FUIW), The Islamic Educational, Scientific and Cultural Organization (ISESCO) – Morocco, United Nations Alliance of Civilizations (UNAOC) and Ma’din Academy, Kerala, India. Food and accommodation were provided by conference organizers for 3 days.

As part of Mamoun’s speech about “the role of civil society in ensuring peace and harmony in a multicultural and multi-religious environment“, he introduced URI as the global grassroots interfaith network that cultivates peace and justice by engaging people to bridge religious and cultural differences and work together for the good of their communities and the world. Mamoun spoke about the work of URI in several fields, including Peacebuilding and Conflict Transformation, Human Rights, Poverty Reduction, People’s Empowerment, Social and Economic Inclusion, Policy Engagement, Political Partnerships, Nuclear Disarmament and Environment Protection. Also, I highlighted URI major global initiatives shedding lights on the URI “Talking Back to Hate” Campaign” as an example of how faith-based organizations can contribute to peaceful coexistence by combating hate speech. Naoufal shared his experiences with a number of regional and international organizations/ initiatives that engage in promoting peace and intercultural dialogue, including his work with United Nations Alliance of Civilizations. He stressed the importance of cooperation and networking between like-minded civil society organizations to maximize their impact and role in maintaining peace and security to make the world peaceful and cooperative. He explained how URI is open to cooperation with local, regional and global like-minded organizations.   Marrakesh April 8th 2017:   We travelled to Marrakesh by train and met with “Moroccan Youth Forum for Cultural Exchange and Scientific Research CC”. Mamoun delivered an interactive workshop on “How to strengthen the role of civil society in peace-building and peaceful coexistence”, to CC’s members and social workers.   Rebate April 9th 2017 We travelled to Rebate by train and met with Salam Shabab CC and with Ms. Aicha CHIBANI CC Liaison Officer for Maghreb countries + Libya (Algeria, Morocco, Mauritania, Tunisia and Libya).   Tunisia: Soussa, April 10th 2017: We travelled to Soussa City 11 &12 April: We visited the Centre de recherches et des etudes le dialogue des civilisations des religions compares (Research and Studies Center for the Dialogue of civilizations and religions comparison), Soussa city in Tunisia.   Delivering an interactive workshop on “The role of civil society in enhancing people solidarity and promoting coexistence among followers of different religions” for the students of “University Culture Center- Soussa and the student Club for Culture of Business Creation. The club is in the process to establish a URI CC. Tunis the capital: 12 & 13 April 2017: We met with the following CCs: